„CONDEMNED“ An Interview with the artist Pablo Tomek

In his latest exhibition “CONDEMED”, the Parisian artist Pablo Tomek gives us a new perspective on our urban environment and the cities in which we live and love.

Sometimes we stop looking at things closely. How often do we blindly walk through the streets of the city in which we live, no longer really noticing what is building up and dismantling around us? Pablo Tomek depicts the city as something flowing, individual, constantly changing. The city is full of flaws, never completed, but still, an inimitable dynamic. Tomek works with urban materials and visual aesthetics, combined with cultural phenomena and contrasted with his own poetic intimacy. All of this he does with a playful spontaneity and a poetic innocence. He brings us closer to our own urban reality in his very own way.

The Exhibition will be open until the 18th of April in Berlin.

Windows; 68 is a joint venture by Ruttkowski; 68 and BAM Berlin. 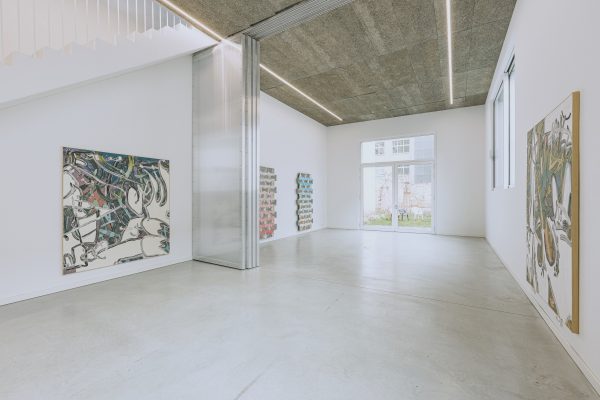 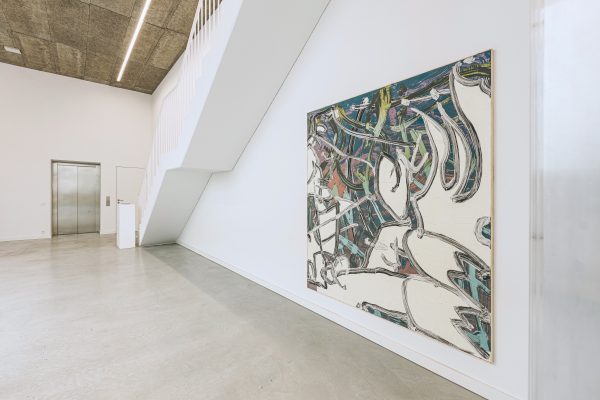 MISS: How did you come to painting?

PABLO TOMEK : I came to painting through my father who as well did a bit of painting. He never lived from his art, but he was always doing something in the last floor of the house. A t ime ago, I started some studies in graphic design but I was super bored with it. It was like a jail where you had to respect some codes and in all of your creations, you had to follow some directions. So I said, „Okay, I don’t want to do this.“ In the same time, for years and years I was doing graffiti in the street with friends.I started to paint, let’s say like 15 years ago, but step-by-step, I realized that it was also a way to use new tools, other brushes, and play with new colors, to come over from graffiti into painting, and to do something more abstract.

I then decided to rent my first studio- to find a solution to bring what I wanted and what I loved in the street into the atelier: a smaller space, a smaller size, so this was a bit like the first thing.

You said you started to study graphic design … Was it too digital?

Yes, I started for a few years, but I never finished. I n the beginning, I also learned how to do compositions etc. but of course it was really digital. The final point is, it is never what you want to do, it is always what the client wants to have. So I didn’t want to give my effort to a product which is not mine.

I think it was important for me to lose myself in a new discipline that I did not know at the time. So I just did what many artists do, and I got lost for 2-3 years, trying to find my identity, trying to find a reason why to do stuff … no t just for the beauty or for the aesthetics … I only do something when it makes sense, when it is connected to a concept and there is a reason to do it. 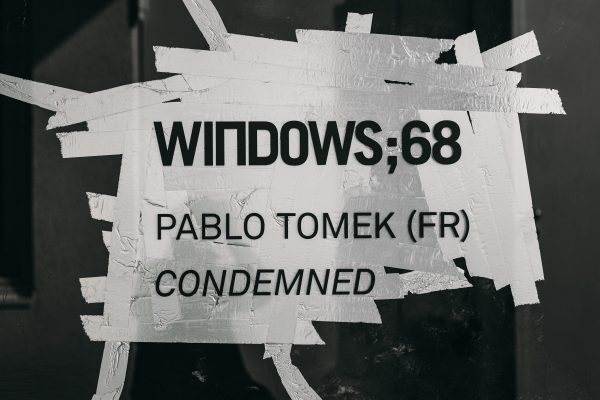 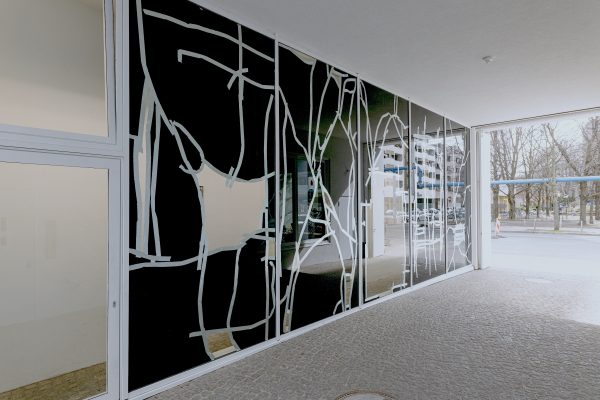 Your main inspiration seems to be focused on street art and graffiti. True?

I would not say it is street art, but more about the context of the city in general. The context about what you are involved in when you grow up … I mean, if you studied your whole life in nature, you may find your inspiration being connected to nature… If you are living in a city with everything a big city can offer, be it in an aesthetic way or a movement or a transformation, you learn a lot about the city from its new details and gain tools you could use from it. So yes, it’s coming from graffiti because it was a way to open the eyes around me in the street. But I really don’t use graffiti in my artworks, except to do some details to the painting. Sometimes I take some parts of graffiti found in the street and I use them to organize a painting.

So you would say cities are what inspire you the most?

I lived my whole life in Paris. I would not say its going down to the historical past of Paris, because I am more connected to the idea of ​​transformation in any modern place. The first thing that attracted my eyes were the details I saw in Paris.

What do you think about Berlin in this context?

It’s an inspiring city. Berlin has a completely different past than Paris. The way the architecture comes through old places… You can also see and feel the life inside of the city. It is not that clean at the moment, it is still full of mistakes, full of surprises…

When I look at the window presentation outside of WINDOW68, I can definitely see this hint of (de)construction you are mentioning, like the destroyed windows fixed with tape.

It was also about exaggerations. Its always a bit of the same idea, like an anecdote. In this case, it is a cool object like aluminum tape, which is well reflecting of the light, and you learn how to slowly draw a line. You cannot go super fast. I am not crazy about tape in general, but sometimes when a glass is broken, the line of the break is just super beautiful. In this case, the window is not really broken, but let’s act like it is. We left some empty space where you can still see the paintings through it. 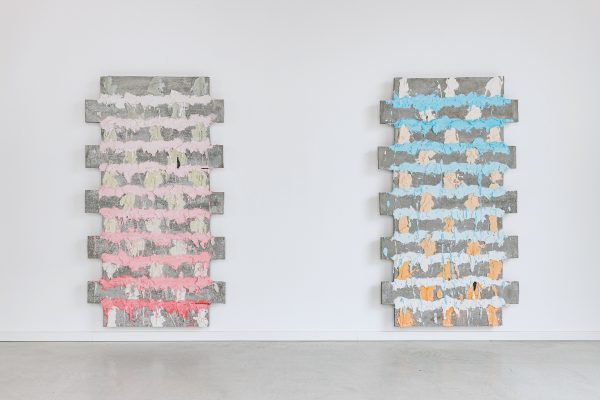 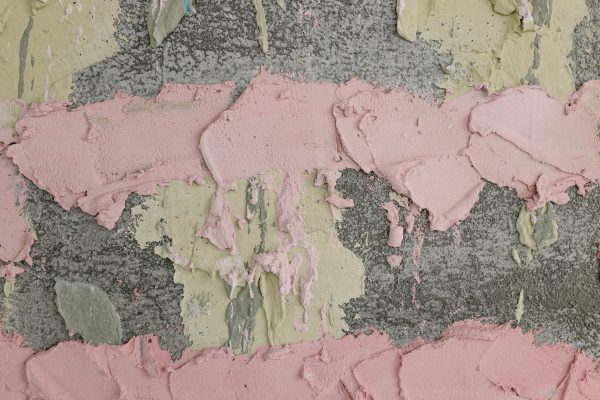 It’s very Berlin to just fix something DIY instead of fully changing it.

Yes. It’s connected to the reactivity of the city to get something clean and proper, so that people don’t think it’s dirty… It’s way more anarchist here.

What was the last artwork which really impressed you? Or an artist in general?

I think it was Ida Ekblad. It’s a lot of abstract paintings, super well treated with super specific technique and all about the process. She worked with silicon paintings based on chemicals, something like plastic fluids. Really impressive… also in the combination with some of the visuals she took, I don’t know from where, just pure aesthetics. I think it is super. Just fantastic.

Any specific place in Berlin you consider as the most inspiring?

Yes, you know when I came the first time to Berlin, it was 10 years ago. I was at Warsawerstraße. It’s this kind of party spot right next to the trains.

Yeah exactly, I went there years ago to party and to go a bit crazy. I was a bit shocked about this all industrial city rendering, mixing with paintings. It was chaotic. But it has been in my mind since the beginning.

I think for a lot of people coming to Berlin, this place seems to be really special. It combines so many different things. It is a place with a different kind of charm, like a backyard mixing in different directions.

Especially when you are young. It’s a huge contrast, especially to Paris. Paris has been a bit more locked for years. In Berlin, people are still a bit more open to do stuff, to rent spaces, etc.

Do you think Corona slowed people down enough to simply enjoy and take time for art again?

I think  the less food you have on your plate, the more you just concentrate on what is there. But in another way, we also eat so many pictures up in the digital way that it may an influence on our perception of art. When something is open, people go there and take time. But it is quite logical. 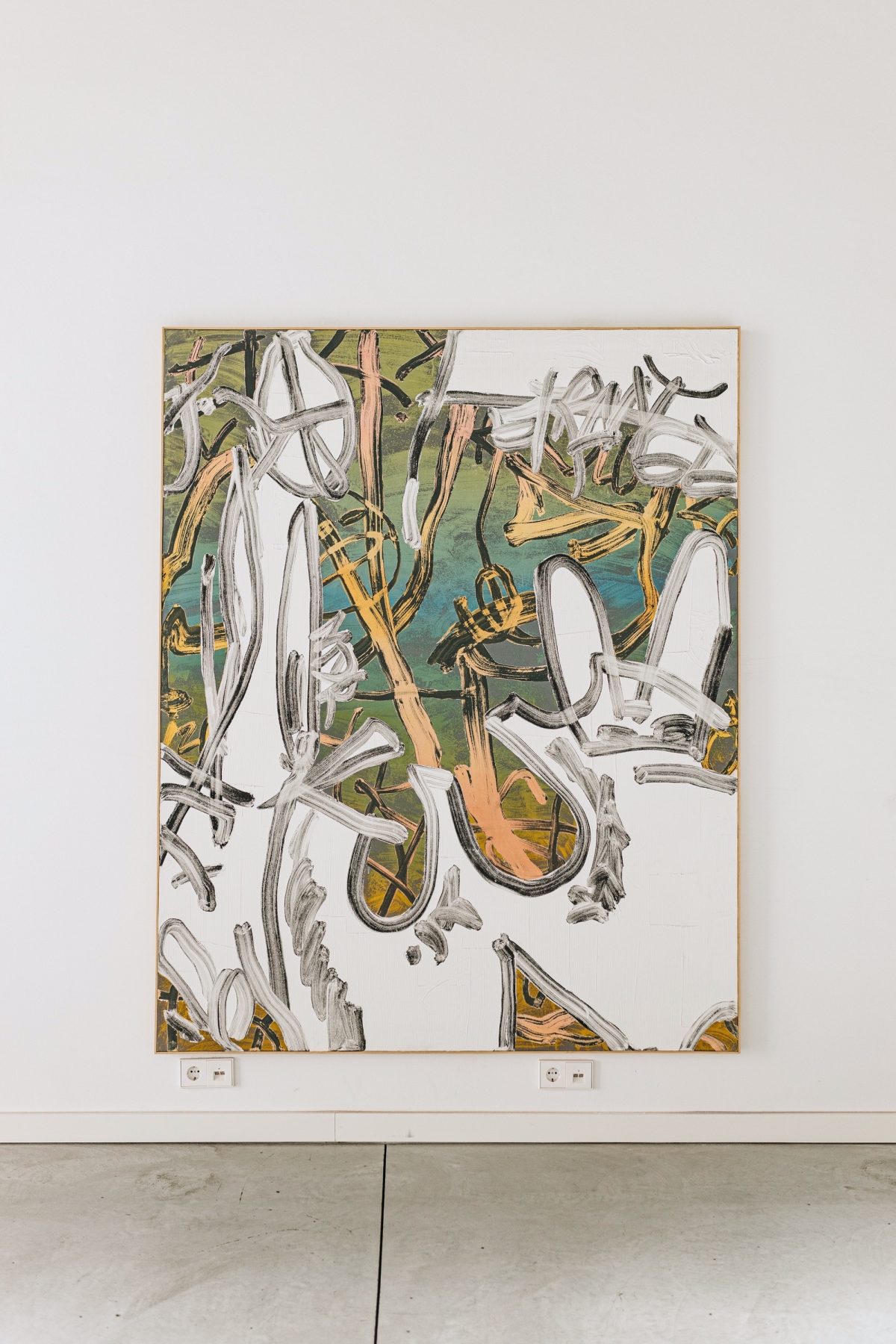 You said people „eat“ a lot of images digitally. What do you think about the digitalization of art?

I hate this concept of a digital sphere. As an artist, it is diabolical, what it does to the resume of the artist. I had a request from a gallery owner who was testing a digital exhibition, just going to the website, click and zoom. And I said no. I am really really really not into it. I understand that it is a way to keep the boat on the water, but when you are in your atelier and you are woking with all your tools… to make it flat… to make it digital… that is just something I don’t want to participate in.

Fashion is something as well which kind of went toward the digital as well. In 2017, you did a collaboration with OFFWHITE. How was your experience diving into this industry?

I am not fascinated by fashion in general, but I do love it. I recognise stuff that I really enjoy, be it purely aesthetic or even for the concept. I have met Virgil Abloh and he was in contact with my work. He proposed this collaboration to me. My point of view was to see how a brand like this would use my work, and how we can process something by turning my paintings into patterns. And also to see how the paintings will react to a body in movement. It was a good surprise. Everything was well done and nicely respected. They also asked me to work a bit on the set design, so that made me super confident in myself and in my compositions. That was a few years ago. I am 33 now and I have become a bit more aware of what I was doing 5-6 years ago, and this collaboration was at the beginning. We are as well now working on another collection. It was really exciting to discover something like this, something not really of my world, to be an artist and a visitor at the same time. 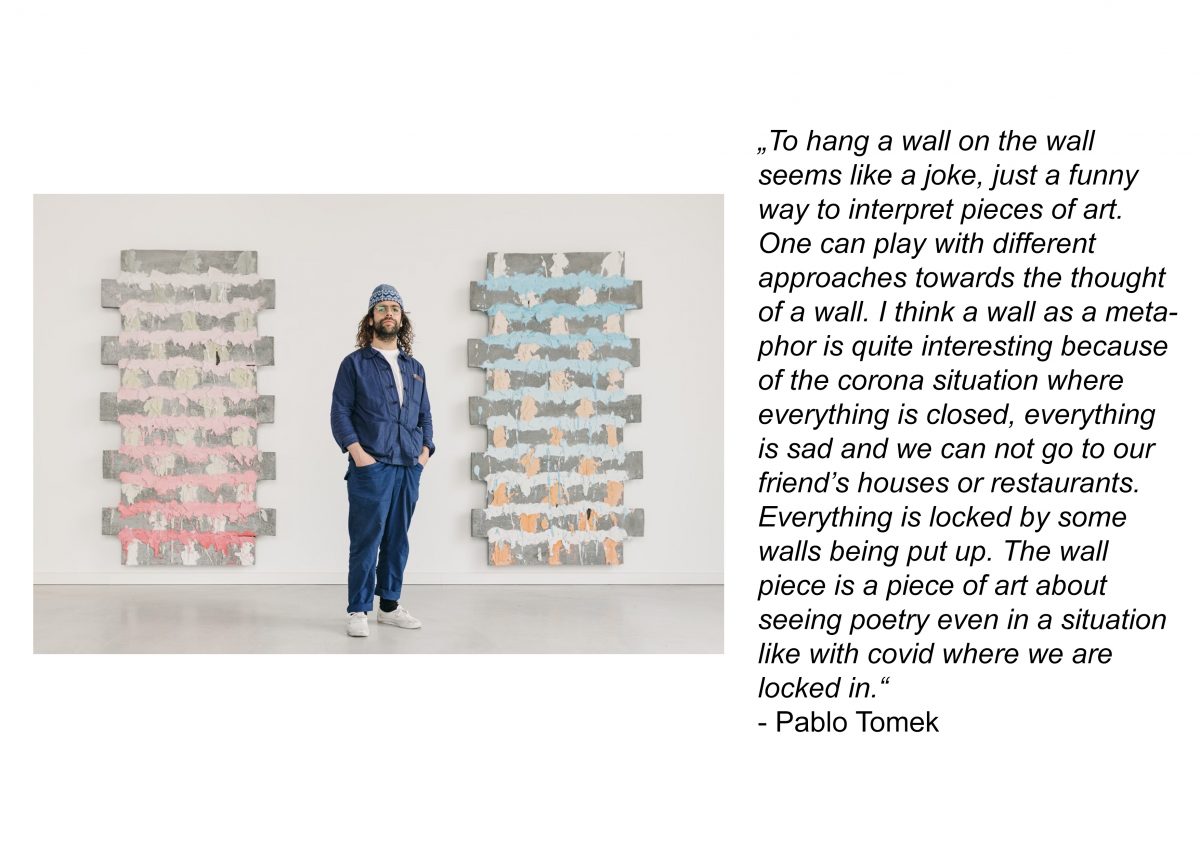 All pictures / material is courtesy of © offenblende.de  & Galerie Ruttkowski68 R; 68