How to push equity for women in the sneaker community: Storm Reid x New Balance

„Ultimately, I want to inspire women and girls to take up space unabashedly.“

Storm Reid is clearly on the radar of many and quickly became everybody’s darling (not only for her standout work in „Euphoria“ or D.C.’s „Suicide Squad,“ but also her humanitarian relief work).
On October 27, American Sneaker-Great, New Balance, officially announced Storm as its latest ambassador. As Storm takes her first steps into the sneaker world, she wants to use her platform to represent women in a largely male-dominated space. Now, she shares her believes, aims and her work alongside New Balance with Fräulein.

How did the collab come about?
When I was approached by the New Balance team, I was so excited to know that a brand I admired would be interested in working with me. New Balance really took the time to get to know me, my style, and ultimately my goals when it comes to fashion and using it as a tool to inspire young women. I love fashion and have always been a sneakerhead, but beyond that, New Balance really aligns with my values. I’m just so excited to be part of the New Balance family and can’t wait to share all the amazing things that we’re working on!

Would you call yourself a sneakerhead?
I’ve been a fan of sneakers for a long time, so I think by definition that makes me a sneakerhead! I’ve always got my eye on the newest drop and growing my collection.

„It’s so important for young women to see themselves represented, and to see other women feel empowered.“

What do you think sets New Balance apart from other sneaker greats?
I love that New Balance has so many unique silhouettes (and color options!) that span both lifestyle and performance, and their comfortability is definitely what makes New Balance sneakers great. I’ve always believed that fashion has no gender and people should wear whatever it is that they’re most comfortable in, so I really appreciate that New Balance has something for everyone.

What do you and New Balance have in common?
New Balance is a family brand at its core, and family means everything to me. Without the support of my close circle, I know that I wouldn’t be where I am today. New Balance really believes in the power young women have and I am honored to be alongside brand ambassadors and athletes like Coco Gauff and Sydney McLaughlin. It’s so important for young women to see themselves represented, and to see other women feel empowered, be celebrated, and succeed. And this is what I hope to represent through my new partnership with New Balance.

What was the motivation behind joining New Balance?
This is a dream come true! When I got this opportunity, I knew this would be a moment where I would be able to pursue my passion for sneakers while also doing what I love most, empowering young women.

Through this partnership, you want to inspire young women to be confident in who they are—even if they still haven’t figured it out. What have you not yet figured out about yourself?
New Balance and I share the belief that women should have the confidence to pursue all of their interests, and I’m thrilled that the brand has chosen to support me as a perfectly imperfect, multi-dimensional young person who is learning as I grow. I have figured out that I don’t have it figured all out, and there’s beauty in that. As I’m transitioning into becoming a young adult, things in life can get confusing and sometimes even overwhelming. However, I embrace those moments because I know I’m still learning and growing. I will make mistakes, but at the end of the day, I acknowledge that despite my imperfections, I’m still trying to be the best person I can be for myself and others. 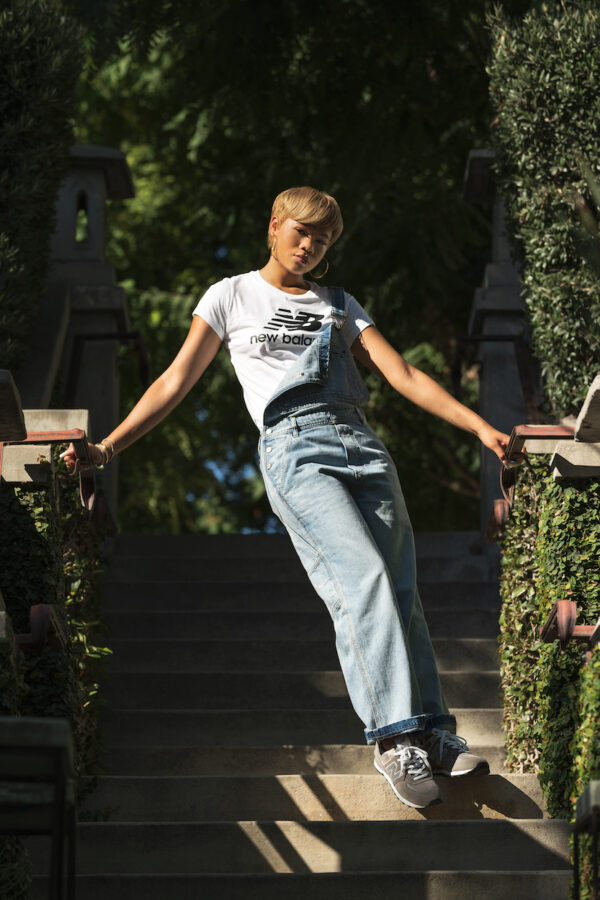 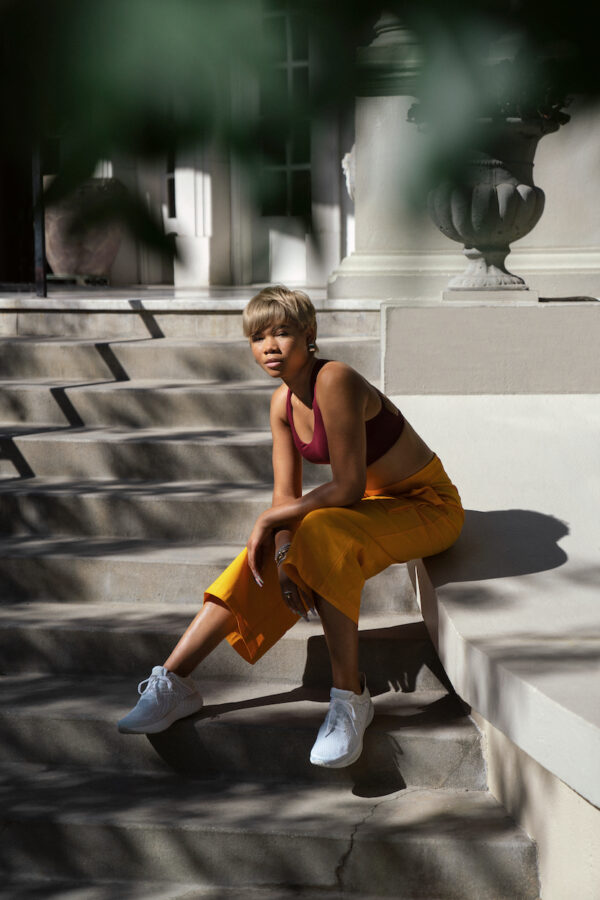 What do you think is blocking young people’s confidence the most these days?
I believe social media, which intersects with conformity, blocks young people’s confidence. However, social media is a beautiful thing when it is used purposefully. It is a space where people can connect with others, learn important information, empower the ones around them, and find inspiration from the world. But I think we are all cognizant that social media can be dangerous as well. People can be mean, which is harmful to all people, especially young people, and frequently social media can make people feel as though they have to be something they’re not. That’s why it is essential for me to be authentic across all my social media platforms. I want people to see me for me. I also try my best to be a positive light for all of my supporters and empower them to be comfortable with being themselves unapologetically.

„People can be mean, which is harmful to all people, especially young people, and frequently social media can make people feel as though they have to be something they’re not.“

Why do you think it’s important for women—especially young women—in the entertainment industry to be dedicated to a greater cause?
I think it’s important because I can certainly think back to when I was a little girl that found inspiration in celebrities like Zendaya and Keke Palmer, so I want to help women feel seen through fashion and inspire the next generation of little girls to follow their dreams and claim their moments. It’s so important for young women to see themselves represented, and to see other women feel empowered, be celebrated, and succeed. And this is what I hope to represent through my new partnership with New Balance. 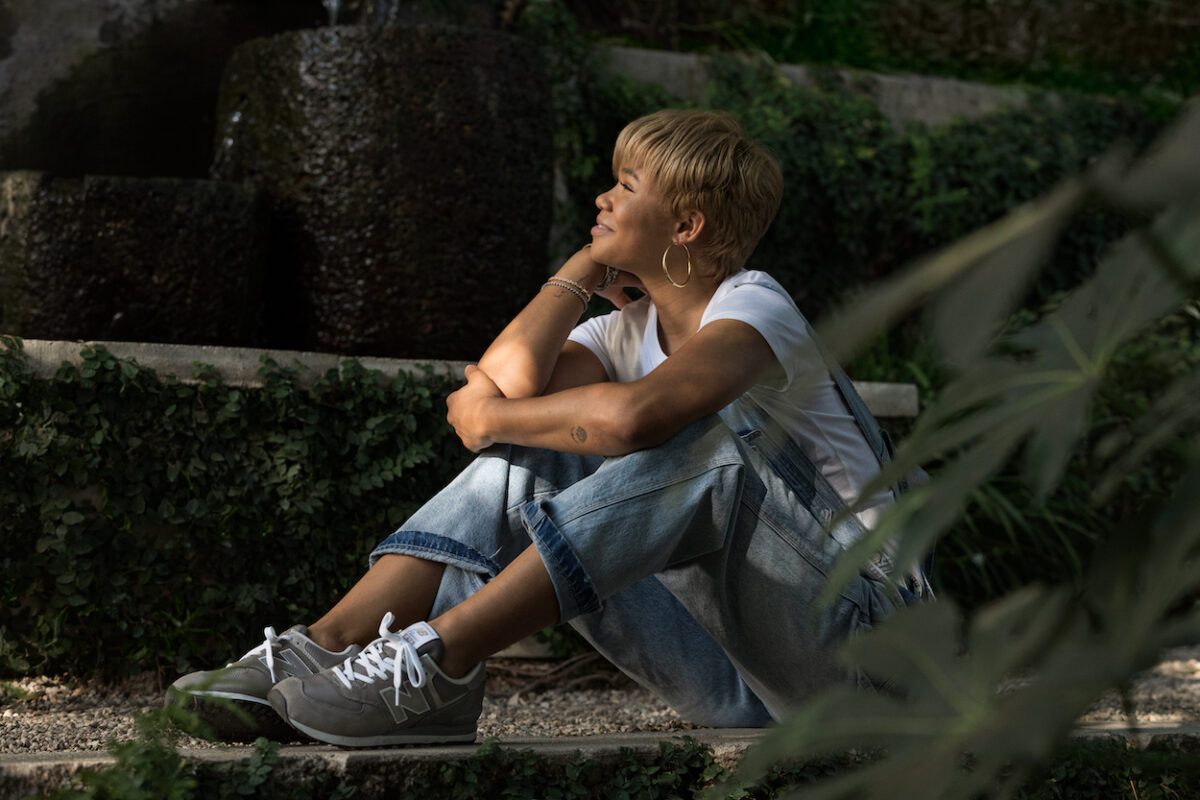 New Balance is known for their rugged, athletic styles that can be worn as everyday looks. Does that also apply to you?
I’m a fairly active person – whether it’s going to class, being on set all day, dancing with friends, or going for a run, New Balance has so many performance styles that can easily transition from workout to hangout, which are perfect for people like me who are always on the go. I’m currently loving the Fresh Foam 1080v11!

What’s next for you?
My partnership with my New Balance family is just getting started, so I am excited for everyone to see what we are doing in the fashion and philanthropic spaces. My movie Searching 2 is coming out in 2022, with many other forthcoming projects. Things are also picking up for me as a producer through the production company I created with my mom, A Seed & Wings, so 2022 will be an inspiring work-filled year while I continue my studies at USC