Zanele Muholi’s photographs, displayed at Gropius Bau Berlin since November 2021, draw attention on a variety of deep-rooted social conflicts. With Muholi`s expressive series of photographs, the Gropius Bau thus continues its tradition of exhibiting the artworks of important photographers of the 20th century. Beholders can admire the full range of more than 500 photographs from Muholi`s first series of works Only Half the Picture to her self-portaits in the series Somnyama Ngonyama.   Born in south Africa, Zanele Muholi self-identifies as a visual activist, fighting against the existing norms regarding the political meaning of sexuality and racial violence: Social and political change took place in South Africa in the 1990s. It was not until 1994, that democracy was introduced and apartheid, a system of „racial segregation“ implemented through white minority rule, was abolished. Muholi`s works document the life of Black LGBTQIA+ communities in south Africa since the early 2000s in an intimate and powerful way and, moreover, depict an act of visualization, empowerment and social activism against stereotypes and heteronormative gaze. The photographer is involved in collective initiatives as well as media work and inspires younger generations to follow a path of resistance and persistence.

In the early series Only Half the Picture, Muholi photographs profound experiences within the queer community: moments of love and intimacy contrast with images that show intense traumatic events of those portrayed.

Somnyama Ngonyama (2012 to present) is a series in which Muholi took self-portaits to show the political meaning of race, self-representation, and the outside gaze. Taking photos of everyday objects and materials from Muholi`s sourroundings, the series can be seen as an expression of Muholi`s life journey as a Black queer person and broaches the issue of personal memories such as racial profiling. The personal touch is emphasized by the titles of the photographs named after Muholi`s mother, who worked for a white family for over 42 years. 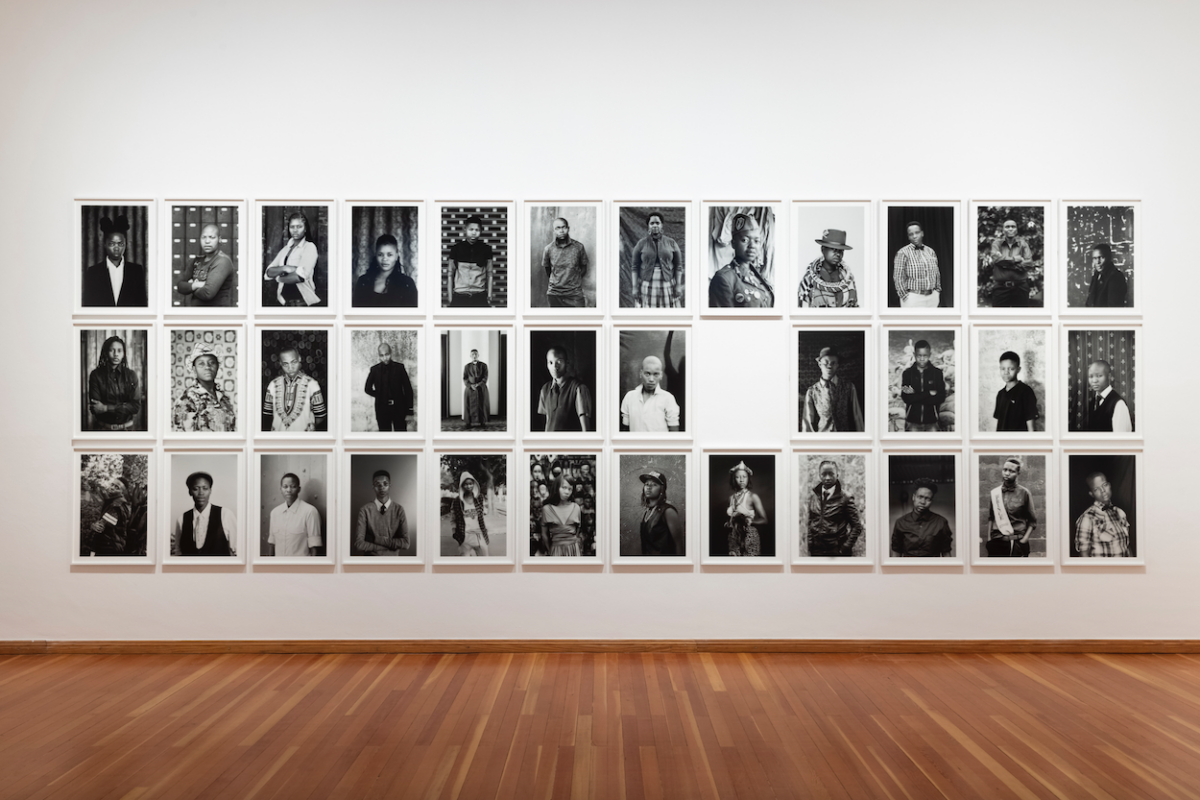 The centerpiece of the exhibition Faces and Phases constitutes the visual archive of portaits dignifying and honoring all black lesbians, trans, and gender-nonconforming individuals. The archive impresses the beholders with the vividness of the photographers: All participants are directly facing the camera, while documents tell individual stories.

Muholi`s exhibition also includes other meaningful series such as Brave Beauties where non-binary people and trans women, many of whom have won Miss Gay beauty are featured. The series Being depicts tender images of couples affirming same-sex love while challenging stereotypes and taboos provided by the society. In each of these series, Zanele Muholi narrates stories of shared success, kinship, anger, and grief. The images question preconceived role models and highlight both the victimhood and strength of the queer community. But beyond that, Muholi encourages the beholders to rethink their own boundaries and creates a shared sense of solidarity and understanding.

The program „Forms of Insistence, Tenderness and Refuge“ accompanies the exhibition Zanele Muholi and includes talks, film screenings, special tours, and an event with contributions from Poetry Meets.