If there is one thing to Casey Cadwallader, it is that he made Mugler relevant again and he’s not leaving his path with the second part of what Mugler offers us for this year’s spring and summer.

While the first part was a three minute short film directed by Florian Joahn, which showcased a surreal, physical and virtual mix of avatars and real models in scenes depicting the streets of Paris and allusions to Greek myths, the second part got back to a more traditional runway setting. However, the new director Torso didn’t stop short on animations for part two either, and so it is Casey Cadwallader himself who opens the new collection’s video by grabbing Bella Hadid by the hips and tossing the supermodel high up in the air of the darkened runway theater. Losing none of that energy, she lands and struts to the back in a pair of curve-hugging, bicolor jeans and a sheer top with a dark band that snakes across her bosom. 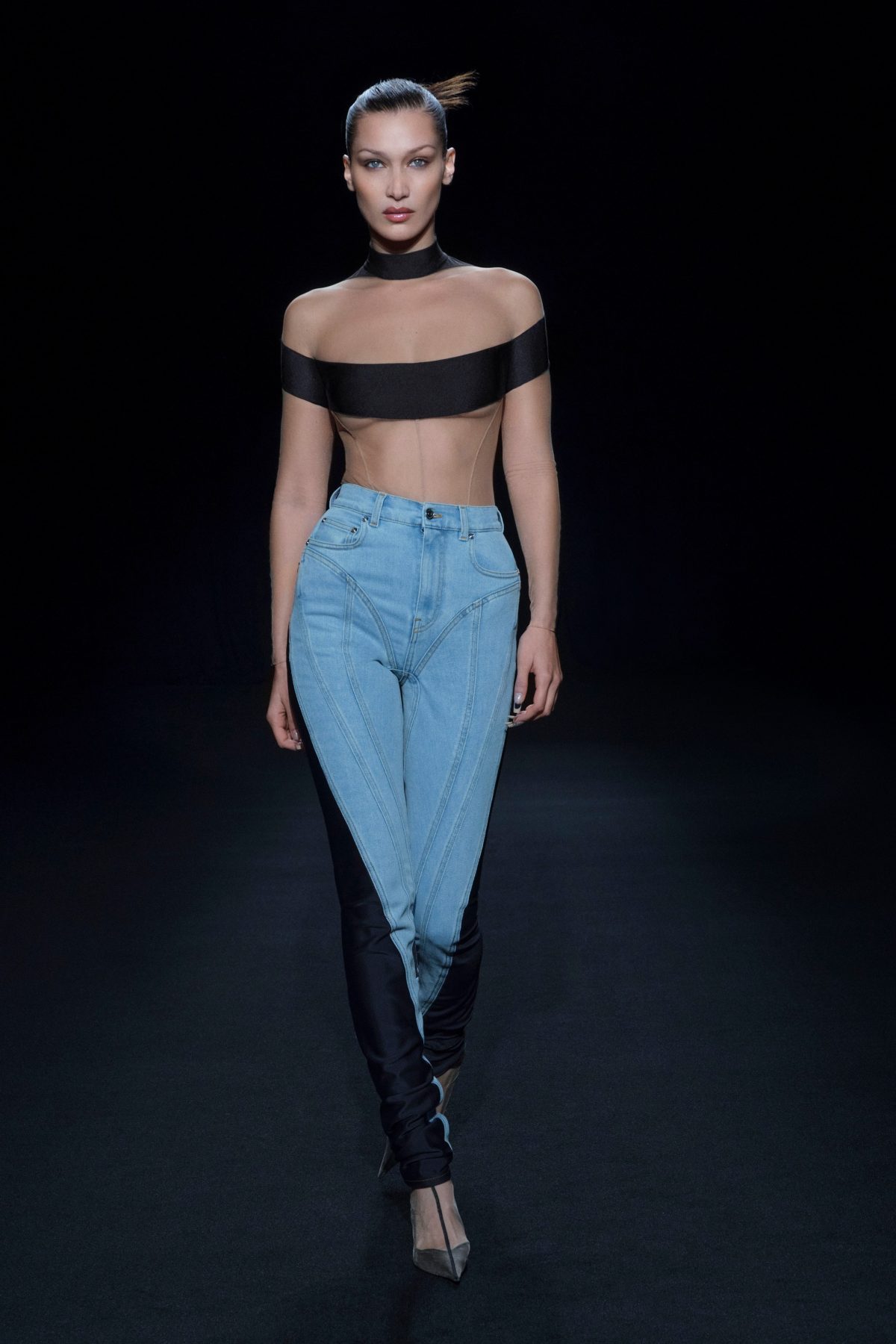 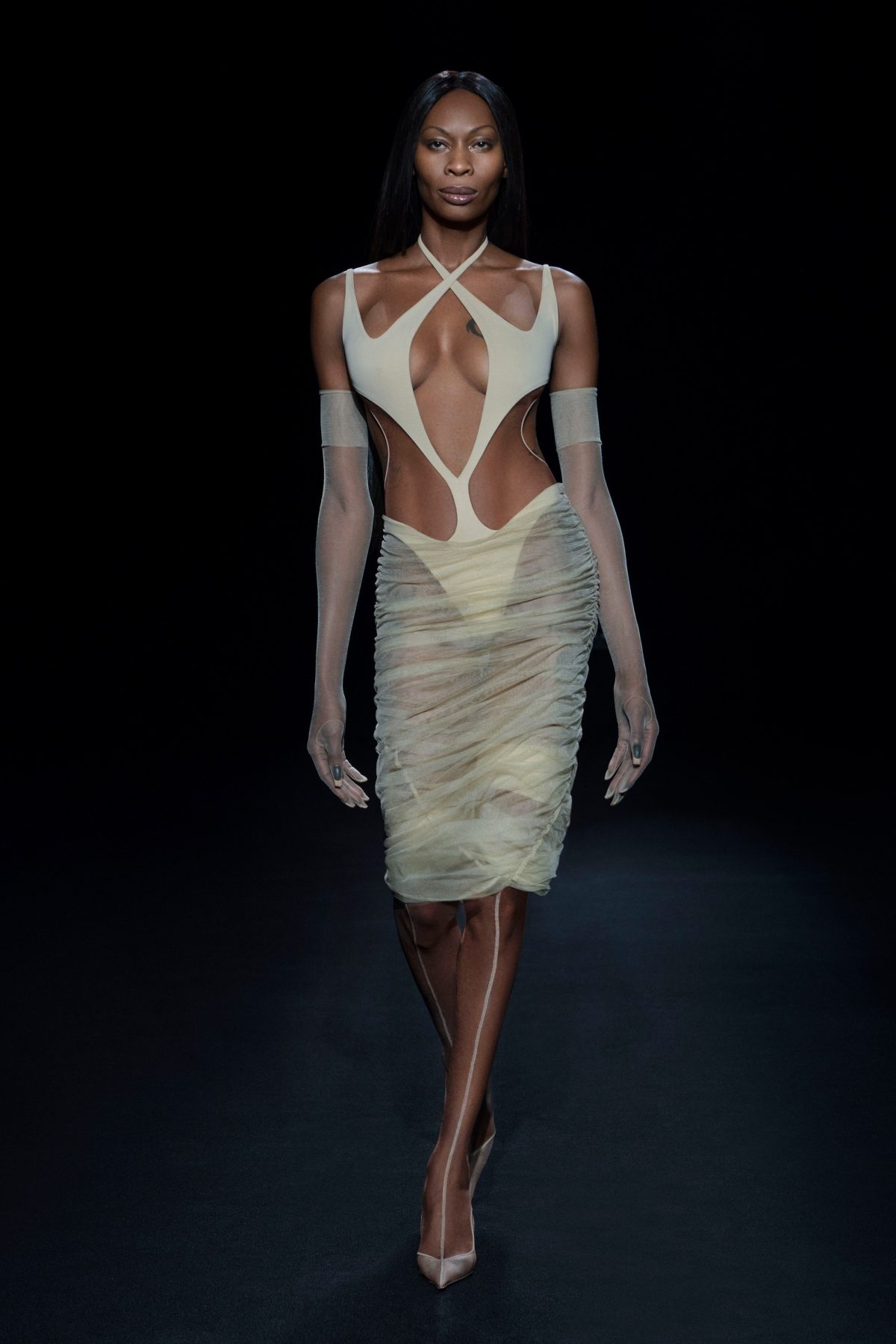 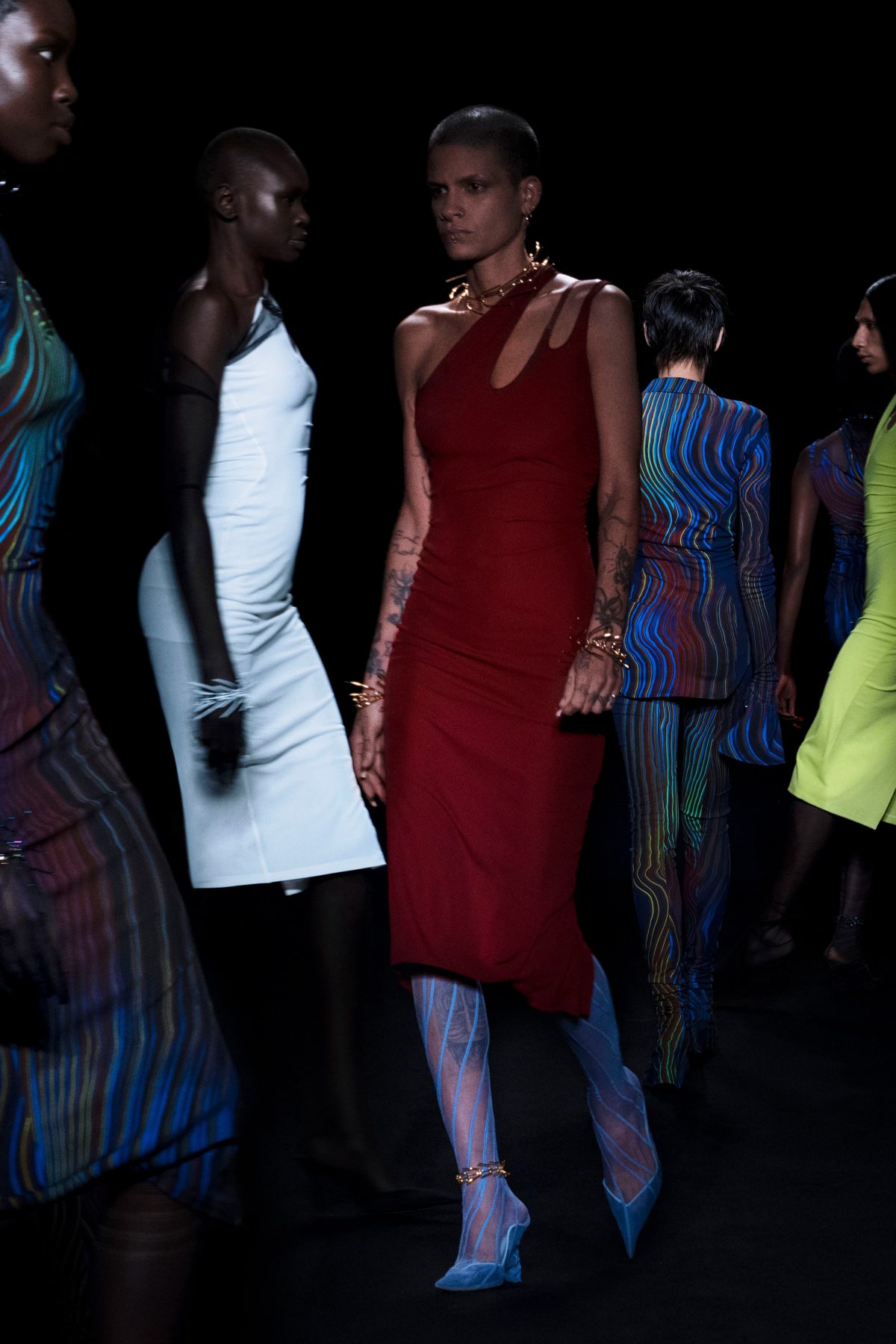 Bella Hadid is just the first in a star ensemble that includes the likes of Irina Shayk and Hunter Schafer to walk the runway backwards, or should I say the last, because it’s actually the finale of the show that opens the film and continues largely with a wind back effect. Though, that’s not the only thing looking backwards with this collection. We see an homage to the house’s legendary founder Thierry Mugler himself. While he was a revolutionary to cast drag queens and transgender models for his spectacular shows in the late 80s, it is Cadwallader who deepens this inclusive aspect with this fashion film’s fantastic cast. Dominque Jackson, starlet of the phenomenal ballroom series „Pose,“ the boldly androgynous Alek Wek and many more make the cast one of the most exciting elements of the show, speaking very authentically and directly to a young and queer audience.

Cadwallader also pays tribute with a look-alike design to the infamous apple green suit once custom-made for another gender-bending legend, the artist David Bowie, and we can attest that it hasn’t lost any of its spice over the years. Thierry Mugler’s spirit is also visible in numerous tight wasp waist and mega-shoulder silhouettes that, despite the heavy use of sheer fabric, give a sculptural and superhero-like feeling to the designs and their wearer and it is the creative director himself who doesn’t stop shouting out that this would be the case for all kinds of body shapes.

Progress in this collection lies mainly in the use of new materials that allow for “impossible” necklines but also for a little bit more affordable price range that makes you wonder if the next time you rob your piggy bank it is for a pair of twisted Mugler spiral jeans or an eye catching illusion neckline bodysuit. If you choose to do so, you can do it right now, as the brand is now in its second season of following the see-now-buy-now approach.

We loved seeing this latest addition to the world of Mugler, even if it didn’t come with revolutionary new designs. That’s why, in the future, we dare to see Cadwallader’s take on a collection that not only incorporates all kinds of female body shapes, but also has some mountain man bodybuilders striding down the Mugler runway like superheroes, just like they did in the 90s.