An Interview with the Painter Clara-Lane Lens

“ I don’t look back at it as a lost year, not at all. I did a lot of things I probably wouldn’t have done without the lockdowns.“

Someone dedicating their life to painting seems to appear as a rarity nowadays. We live in a world in which art is becoming more and more accessible and digitized, in form of quick photography and virtual realms being made possible at all times, in all situations.

It is seldom that someone takes the time to look closely. The Berlin-based Belgian Artist Clara-Lane Lens recently completed her Master of Painting at „LUCA school of Arts“ in Ghent, and has been combining the modern and the classical in painting techniques, focused on the person behind the easel. She deals with gender roles, as seen most vividly in a series she began three years ago, entitled „genderless.“ Through her beautiful artworks, she gives us intimate insights on how she sees the person in front of her eyes, and the vulnerabilities and strength that they inhibit. 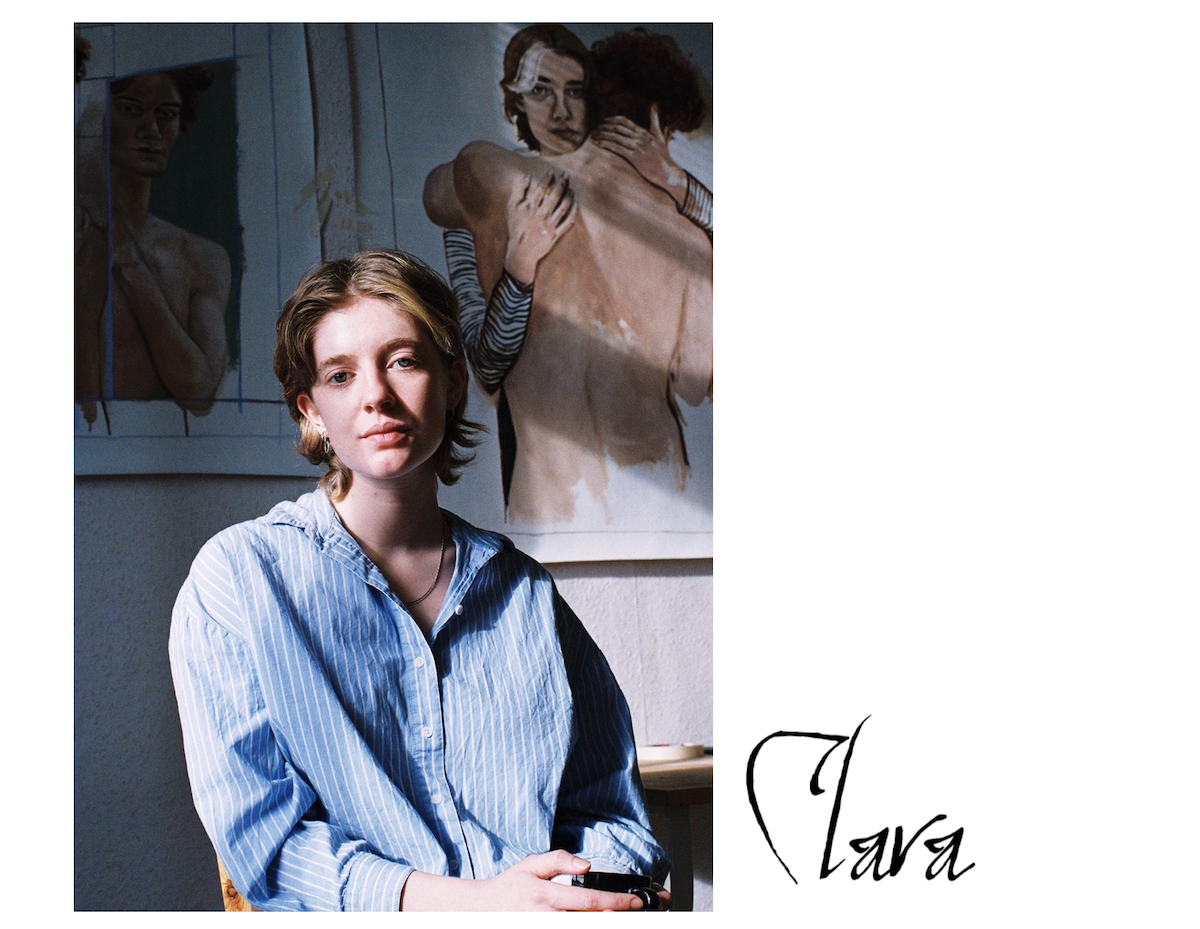 This year was marked by a wide variety of emotions. How did this affect you, your work, and the way you see people?
As I think it did for many people, this year forced me to confront a lot of sides of me I kept pushing away from me, when life was still able to give us moments of escape. As awful as this year was, when thinking of the mourning, the suffering and the loneliness of so many people, I do feel like it released some kind of built-up anger and frustration the world was holding in for a very long time. A lot of sensitive subjects finally came to light- things we were too afraid to discuss in the past. People are becoming less afraid of showing their raw selves and are standing up for what they believe in. And that is also how I have felt towards my work. I started to paint in a way which I was always holding back before.It’s like a je m’en fous -mentality invaded my way of working. Lockdown allowed me to express certain subjects more freely. I also started painting people closer to me, instead of people I barely knew. Firstly, because of the whole lockdown situation, but mostly because I came to realize how much I love painting the faces I know so well.
You mainly focus upon painting people as your subjects. What inspires you about them?
It can be so much. From the way someone puts their hair behind their ear, to how they walk, talk, or move their arms while walking … But it is also how someone thinks or translates their emotions into words. Inspiration can be hidden in the smallest things: a little detail I notice that just makes me go „Ah, yes, I want to paint that person …“ 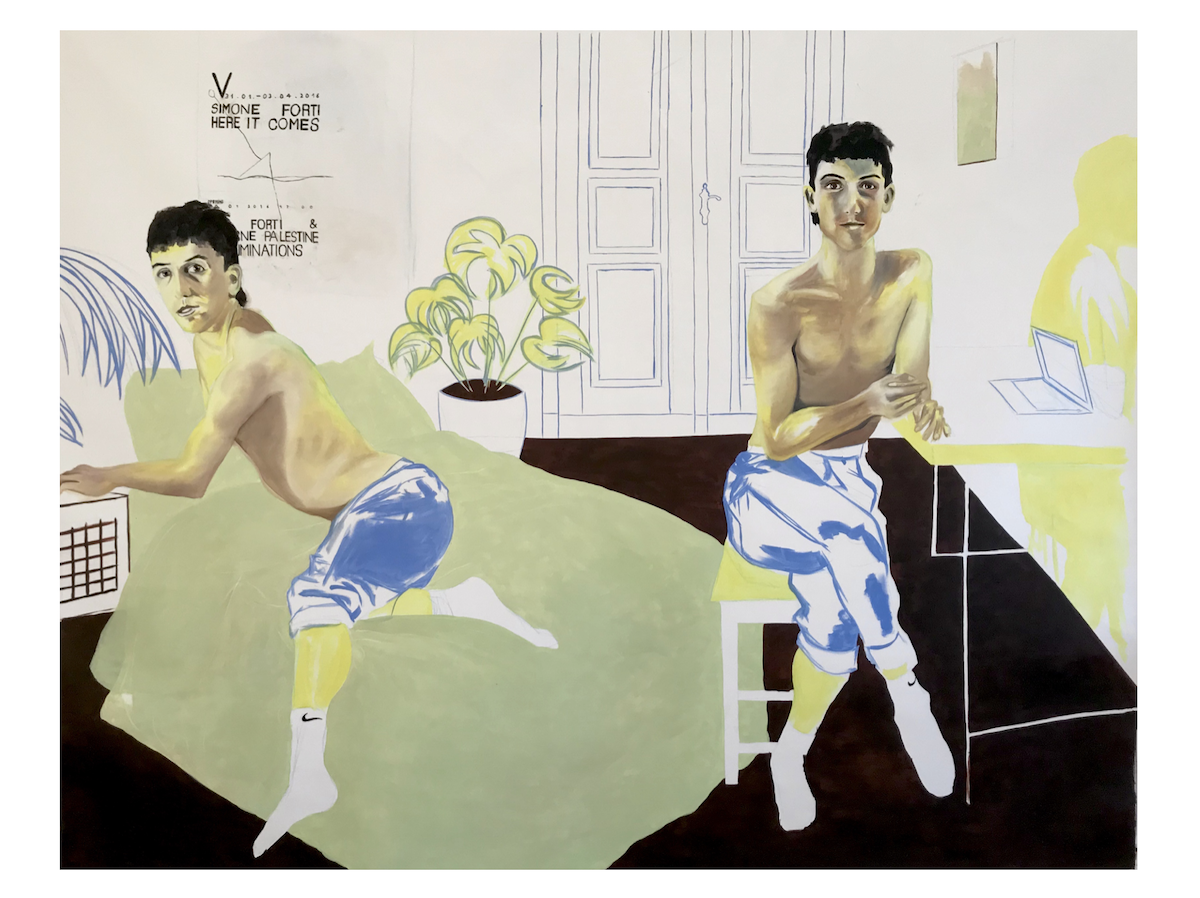 Our own appearance is one of our greatest weaknesses and insecurities. Does your work deal with this?
It’s funny how a lot of the people I paint instantly smile when they see themselves on the canvas. I’m not always sure if it’s out of shyness or awkwardness. Someone I recently portrayed told me it was interesting how he was able to see himself through my eyes. At the same time, I remembered how he felt during the moment I took his pictures to base the work upon. The contrast between his gaze on the work and mine was intriguing. He recognized that specific feeling he had while posing for the painting, on the canvas itself, while it was a different one that I interpreted when painting him.
Many of your works show intimate moments. What is the reasoning behind it?
As I mentioned before, I sometimes paint people close to me, but that is not always the case- sometimes I hardly know them. By placing them in their own home (namely their bedroom or bathroom), I feel like the authenticity of the person is strengthened. I try to paint someone until I recognize them. It mustn’t necessarily be physical … A certain glimpse in their gaze or a mutual feeling that pops up is sometimes enough. And that moment of recognizing each other tends to come in a more natural way when the subjects feel like they are in their safe space. I am also very drawn to bathroom tiles. They tend to immediately give a more intimate atmosphere. They occur mostly in places in which you’re alone. 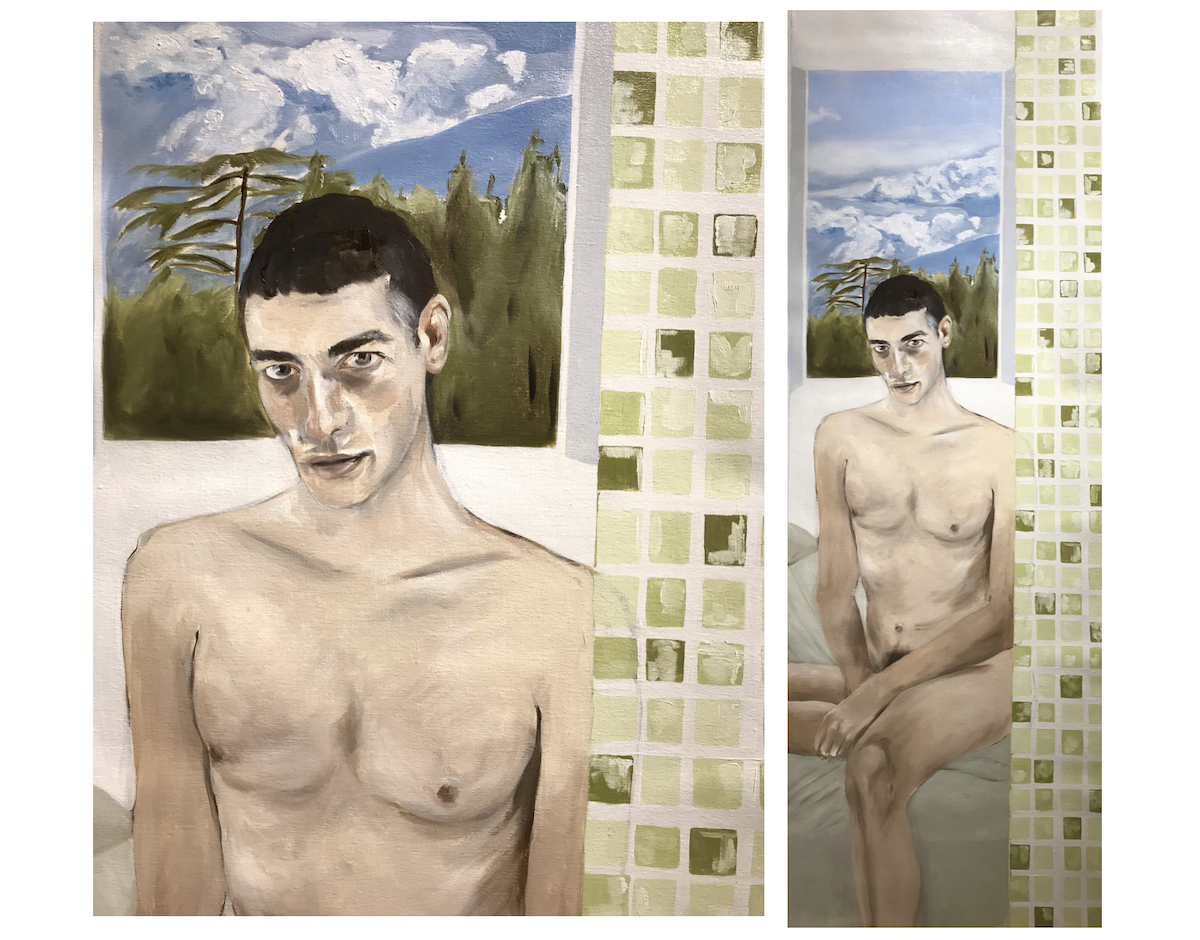 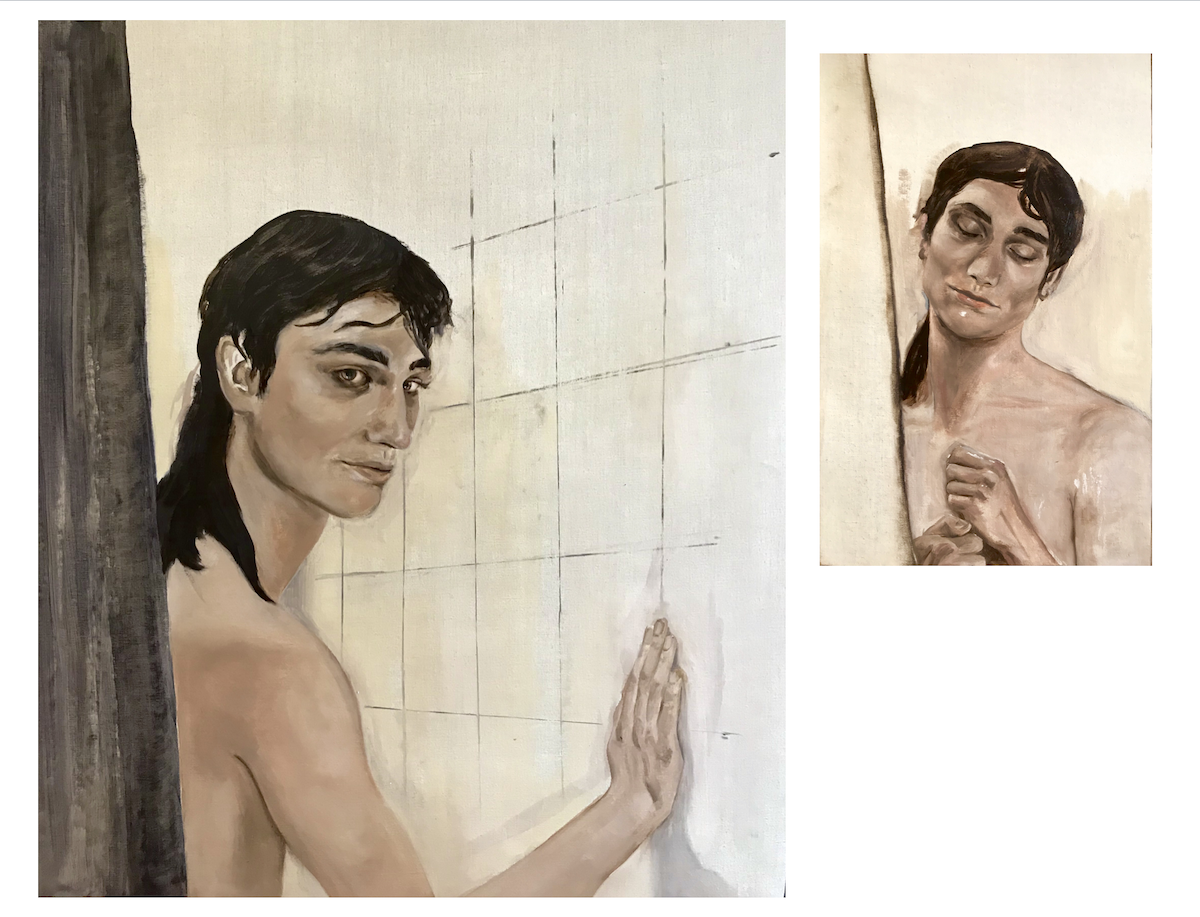 Self-portraits can also be found in your works. To do this, you must deal with yourself for a long time, and intensively. How do you feel painting yourself?
I made a lot of self-portraits. Sometimes simply because I did not have another model to work with, so it was just out of ease. But I think, especially in our twenties, we do indeed question our identity a lot. We’re in full transformation, all the time, trying to define our goals and our personal believes. By painting myself every once in a while, it tends to get easier for me to accept who I am, and who I am becoming. The painting acknowledges myself together with me.
My sister and I were raised gender neutral. We had dolls, but we also had a car racing track in the cellar. We played Polly Pocket, but we also drove through my grandma’s garden on a quad bike in leather clothes. For us, gender stereotypes did not play a role, neither in dressing nor in anything else we did. What influence did gender have on your childhood?
That is amazing! It is so important for children to develop themselves, their opinions and their taste on their own, without being blindly lead by the engraved rules society forces us to follow. It’s a chance not so many get to easily experience. During my childhood, gender was never truly talked about. I could wear whatever I wanteda nd play with whatever I wanted to as well, though. I’d play soccer in the garden but would return to my Barbie dolls right after. I wasn’t forced into gender stereotypes either, but it wasn’t consciously avoided. Although in a way, why do soccer and Barbie dolls reflect different genders? And why is letting your children play with both of them viewed as avoiding gender stereotypes?Perhaps even dividing those particular aspects is where the problem begins. 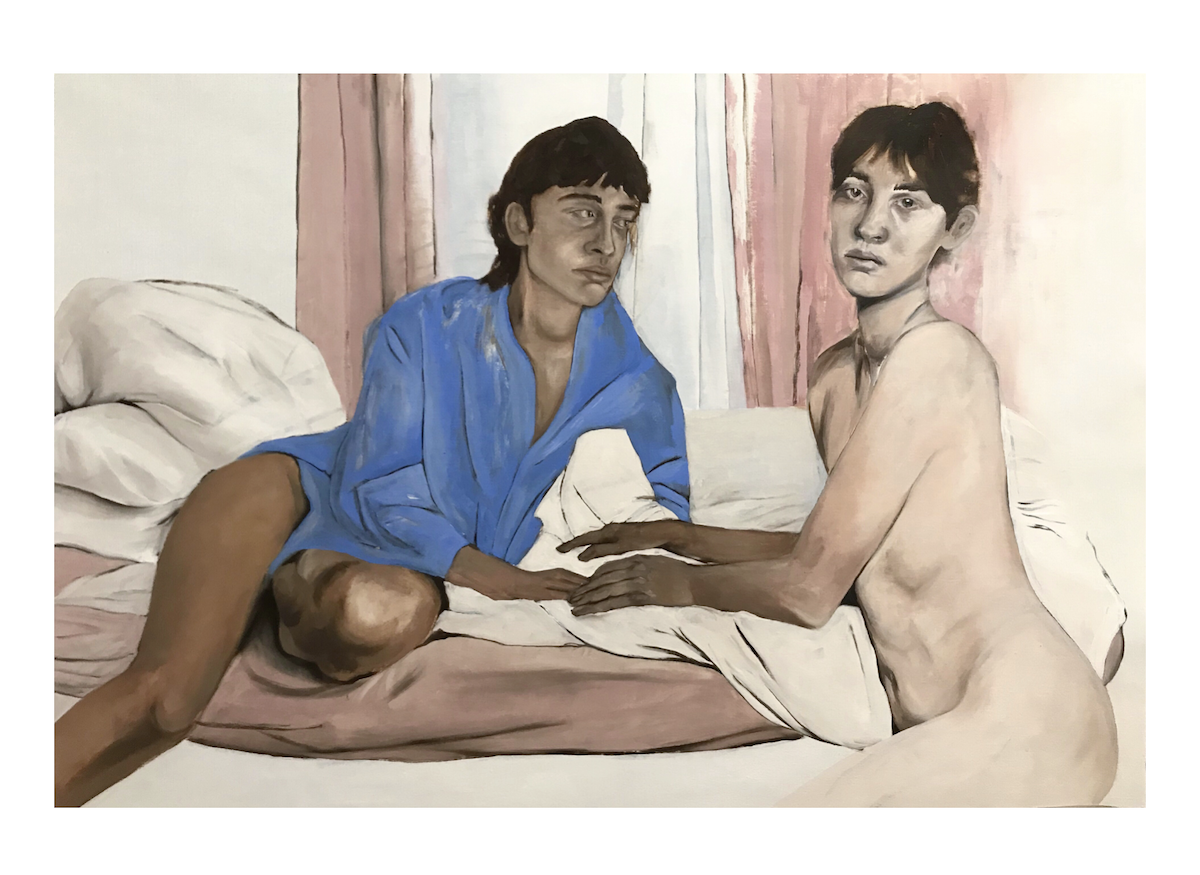 You did a „genderless“ series. What made you do it and what was your greatest inspiration?
I have always been drawn to androgyny. People like Stella Tennant (may she rest in peace), Erika Lindner, and Tilda Swinton fascinate me endlessly. But I came up with the concept for the genderless series by accident. I once painted a girl I knew who was very androgynous. Once the portrait was done, a lot of people asked me about their gender. This made me realize why I was so drawn to making a portrait of her in the first place: androgyny. This helped me embrace the way I painted people from then on. Of course, it has been 3 years since I started with The Genderless Series and so it has evolved a great deal.In my first works, the people’s bodies were mostly censured, and I felt like my whole concept had to be really clear to the people seeing my works. The concept of holding physically visible gender aspects and focusing on other parts of a person I found more important to highlight. After a lot of realization and experience, I understood that gender isn’t only something physical. And then I started to paint certain body parts I didn’t dare approach before.
More and more, art is shifting to the digital space, because it is easier to produce. But oil on canvas makes every work an inimitable one-off. What difficulties do you see working in a society that wants everything to be as fast, cheap, and easy as possible? Are we losing sight of value?
The difficulty I notice with this fast-cheap-easy-society we live in, is that some old art forms are forced to adapt. I am not saying that painting shouldn’t adapt to today’s world, (on the contrary!), Even though it is one of art’s oldest medias, it is still changing and renewing itself continuously. But we have come to a certain expectation of how fast works should be made, and how sellable they are, and what we have to do to be able to survive as a painter. I feel like people tend to forget that a painting only exists once. There can be no copy of it. The triggering part of this, is that a painting is not something that people need to have in their homes to physically survive, but they do live happier with it.Perhaps if paintings were more valued again, this world would have more of a reason to exist.
All in all, what have you learned this last year?
Setting my boundaries, choosing my priorities. I don’t look back at it as a lost year, not at all. I did a lot of things I probably wouldn’t have done without the lockdowns we had. But my biggest accomplishment was learning to just take a breath every once in a while and not feel guilty about the art of doing absolutely nothing. 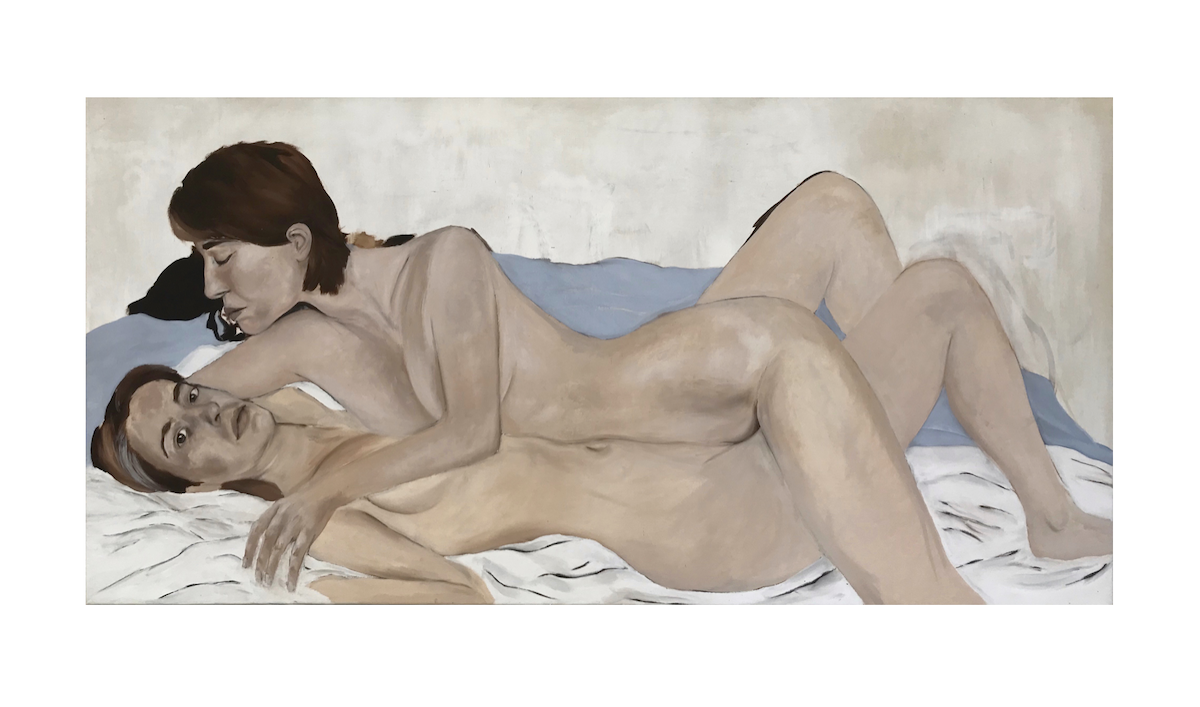 Interview by Carolin Desiree Becker
All Images Courtesy of the Artist, Clara-Lane Lens

A conversation about upscale selfcare with the founders of L:A BRUKET

A reminder for and to ourselves. The last few years we have all gone through an equally exhausting, as well …

Right when the long-awaited weekend is just around the corner, we assemble and (of course) share several news that are …