ABOVE THE GLASS CEILING: ANGELA MERKEL

In our Fall/Winter 2019 print issue of Fräulein, we feature an exclusive series of portraits and behind-the-scenes photos of Germany’s most powerful woman, Angela Merkel, courtesy of the König-represented photographer Andreas Mühe. 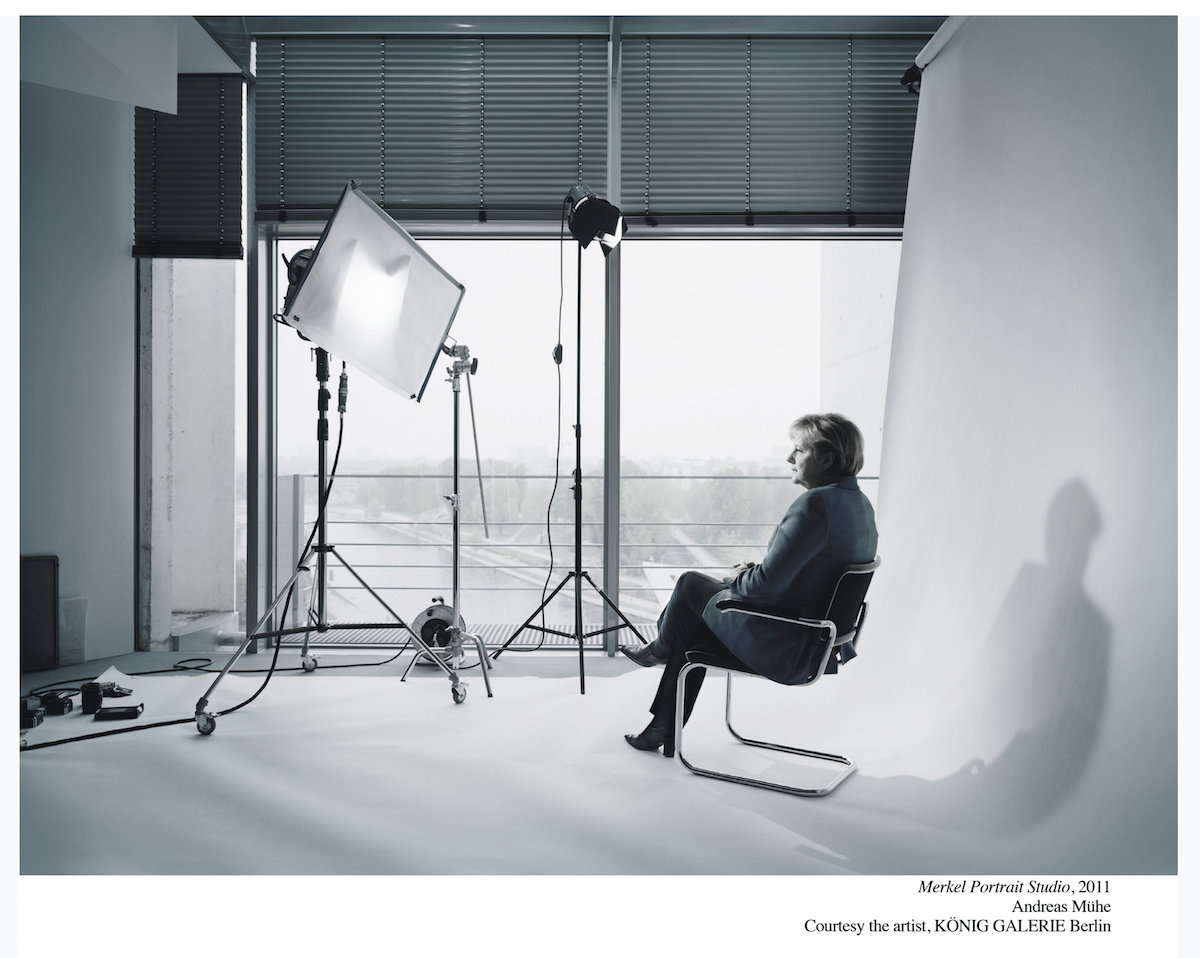 While Gerhard Schröder made a big scene after his electoral defeat in 2005, and Helmut Kohl refused to be released from power until he was practically chased off the stage, the early departure of Angela Merkel was something dignified. Unlike her predecessors, Merkel is more or less self-determined, and moves based upon her own choreography. Even in the final stages of power, she seems untouchable, with no better alternative. This is quite a feat, and a strange sense of support is felt in her supporters and all around Germany. Less so with the conservatives of their own party, and just as little with former compatriots in marketplaces of the east, however the young, the big city dwellers, the progressive social democrats, and the old transatlantic people seem a bit melancholic after her removal- as do the children and grandchildren of those who came to Germany to build a better future for themselves and their families: workers, entrepreneurs, academics. For all of them, Merkel has been a figure of identification, albeit an ambivalent one. We do not register her as a Saint. Anyone who underestimated Merkel, like Roland Koch or Helm Merz, were ice-cold duped. She is the first woman in the chancellery, and she showed a new generation a new form of power.

The fact that she sometimes appeared pale and sounded vague in statements and was called a ‚procrastinator‘ by some applies above all to the first half of her reign. But here, too, one can see the symptoms of her success. Where others hyperventilated and others saw their own sense of honour and pride battled, she remained analytical. When opponents spun intrigue and demanded dependencies and enforced party loyalties, Merkel was always cooler than any man who chased after her title.

The break from her image and the country’s history happened in 2015. It seems so long ago. When refugees from Afghanistan, stranded at the Austro-Hungarian border, hoped for entry into Germany, a once-hesitant Merkel turned into a moralist guided by her innermost convictions and desires of her party. It is parroted that this gesture of humanity acted as a fire accelerator for our society. The former President of the Academy of the Arts, Klaus Stäck, for example, described Merkel’s decision for refugee entry as empty and calculated: a gesture of the „post-democratic German in need of sentimentalisation“, which, even with moderating, is accompanied by the deprivation of West German elites repeatedly mentioning this debate. But even on the other side of the political spectrum, Merkel is sometimes seen as a „traitor“

Even though the flamboyant melancholic (and alcoholic) Willy Brandt and the controlled scientist Angela Merkel do not have much in common besides their faculty for irony: based on different experiences of exclusion, they both remained distanced from their home country. Due to that, they coined an image of Germany that did not require patriotism in order to feel at home. Thanks to Brandt, a postwar generation could dream of a different Germany. In a farewell letter, the author Jana Hensel wrote to Merkel: “If it wasn’t for Angela Merkel, I wouldn’t have found my place in this country as an East German woman. My German-feeling is more of an Angela-Merkel-feeling. I can rest as comfortably in this feeling as others in a house.” It is a historical accomplishment of Merkel that not only East-German biographies are welcomed in the house.

One of the pictures of this article shows her looking out the window of her government limousine and at her country. She seems still, and melancholic. There are hardly any pictures of her that are not controlled, without her striking a pose. The other classic portraits of Merkel reassure this. Still, these new-romantic pictures in the car create a different feeling concerning Merkel. Although she is down-to-earth, it is hard to fully capture her: Grounded, but at the same time floating; a cold politician with empathy in crucial moments of her career. When Merkel leaves, a whole generation of people born after the turn of the millennium will for the first time consciously experience a new person in Germany’s de facto highest state office. In the past, the oppressive, the matted, the morally worn out, felt increasingly exhausted by the empty machisimo of the Schröder years, while the last months of the Merkel era were surrounded by little tragedy. What should follow this woman? Who to flock to? Who to argue with in the spirit of moderation and who could lead this country properly? Even when shivering, she seemed to more secure and upright than many of the other politically elite in prime condition. The Germany we live in and love today is Merkel Germany, in all its facets. It is a diverse country, with many cultures thriving thanks to Merkel. Policies are increasingly less restrictive. The youth are not forced to take up arms. No girls have to believe there is a glass ceiling above them. The concept of power has also changed. The old rope teams, crown princes, and boys clubs have lost their importance. However there are always two sides to the coin. The Israeli lawyer Omar Schatz sued the International Criminal Court of Hague along with Merkel and other EU officials responsible for immigration policies. The accusation: the German chancellor and her political company were found guilty of failing to provide enough (or any) assistance in the Mediterranean. This is true. And within this tension, a picture of Merkel for the history books slowly begins to emerge like a polaroid. So far, we have only seen diagrams and points. The lines that connect are yet to be seen. We remain hopeful. We remain with one sentence in the back of our thoughts: „Wir schaffen das.“ 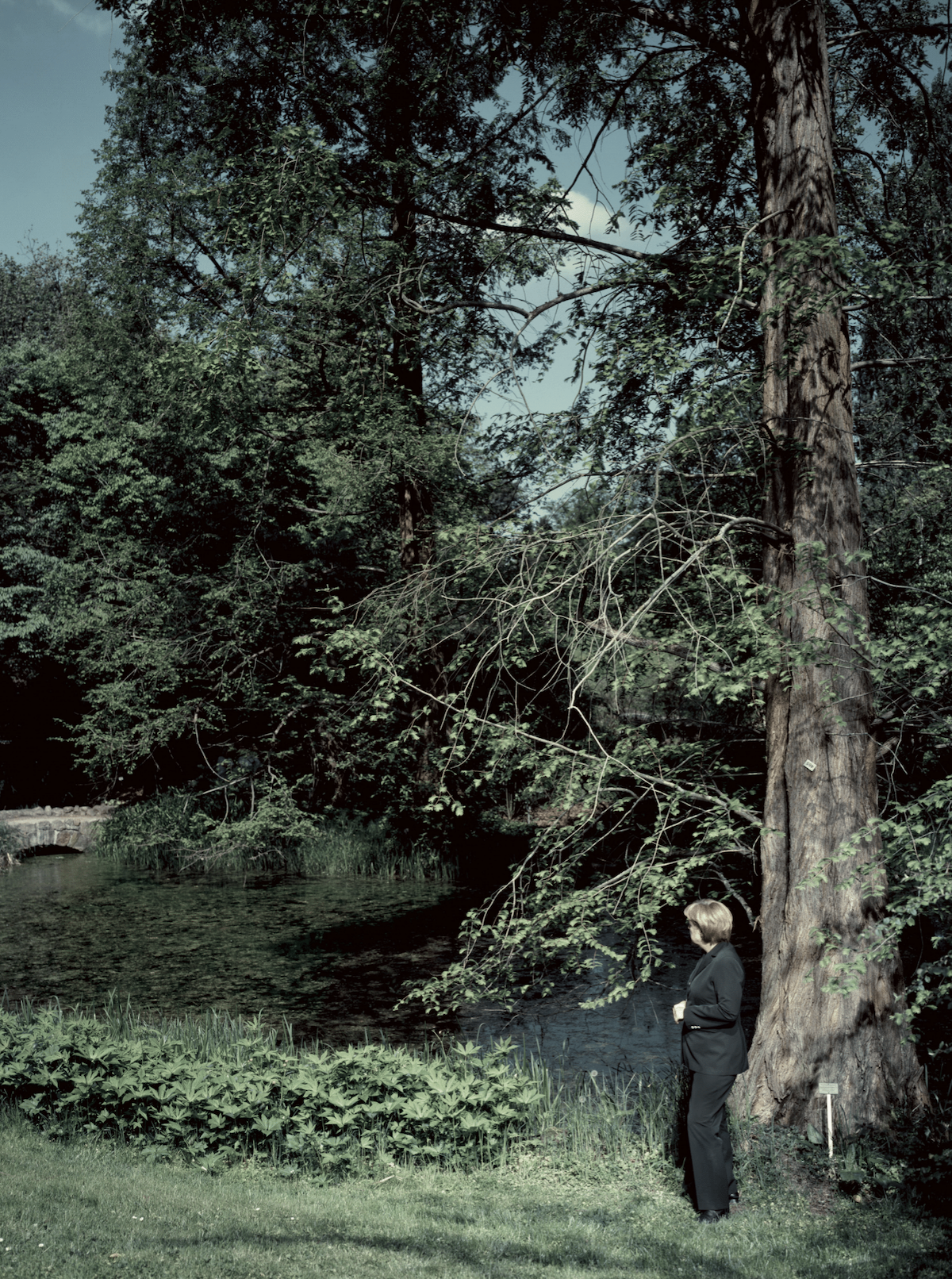 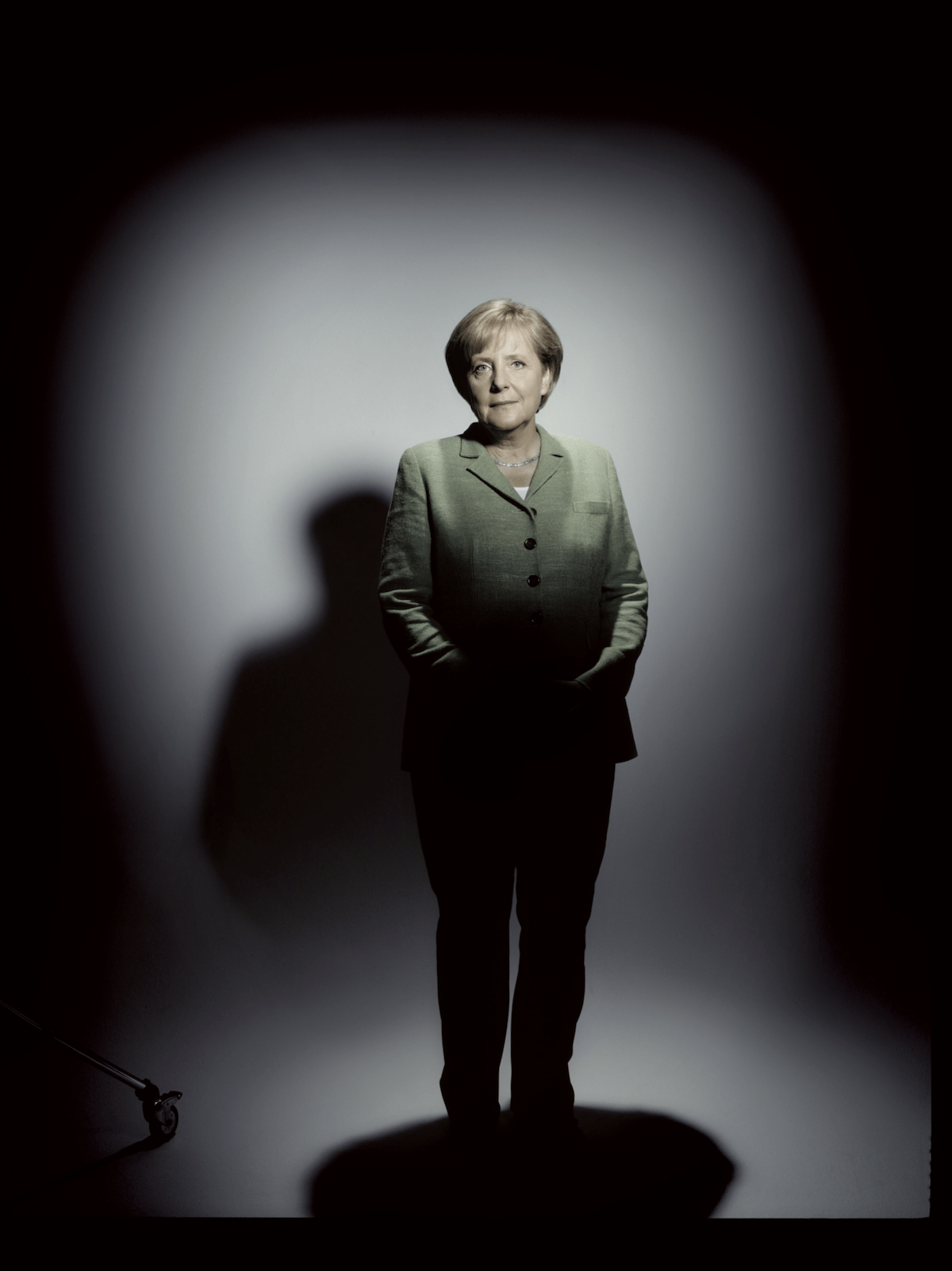 Andreas Mühe was born in Karl-Marx-Stadt in 1979. He has repeatedly dealt with the subject of power in portraits and still lifes. His works shows how power works, how it is staged and designed. He has photographed Angela Merkel repeatedly. Among the chancellor’s photographs shown here, you may find one from an early morning trip through Germany. You can see Merkel looking out over her country from the interior of the limousine through armored glass. This picture, so intimate and true, makes clear: whoever holds the power in his or her hands, is alone. Andreas Muhe is represented by the König Galerie in Berlin.